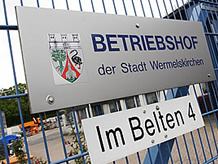 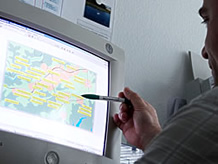 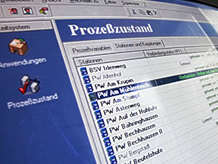 Steinhagen / Wermelskirchen - the town of Wermelskirchen to the west of Cologne has a population of around 37,000, many of whom do not live in the historical town centre but in a densely populated rural area covering approximately 75 square kilometres in total. Dependable wastewater disposal for all households connected to the public sewer network therefore presents a particular challenge to the municipal drainage planners. For the extension of the sewerage system scheduled for last year, the municipal authorities opted for modern engineering controls, which are not only compatible with existing controls but also work with progressive telecommunications and remote control engineering systems.

Around 97 percent of the Wermelskirchen population are now connected to the public sewer network: not only in the rural suburbs but in the continuously developing areas of new construction too. The wastewater concept must also satisfy the strict requirements for drinking water protection, as the southern part of the town is situated near the Grosse Dhuenn dam. This dam with its reservoir (storing up to 81 cubic metres of untreated water) now represents the largest drinking water reservoir in the catchment area of the river Wupper.

The first discussions between the Wermelskirchen town authorities, the Wupperverband, engineering consultants Ingenieurbuero Fischer from Solingen and the design engineers from wastewater specialists Jung Pumpen were held in the year 2000. The constant expansion of infrastructure in the town also necessitated a corresponding increase in the wastewater disposal capacity. The existing pumping stations would have to be augmented by a further 50 to 60 pumping stations. The demands of the municipal drainage company were clearly defined: the new equipment must be suitable for integration in Wermelskirchen's modern process control system via a telecommunications system and must be one hundred percent compatible with the existing control software, whilst remaining financially feasible.

For the 75 pumping stations the Wermelskirchen authorities opted for three different types of flexibly deployable control units made by the westphalian wastewater specialists Jung Pumpen. First of all, the areas were divided into four construction phases according to the degree of detail that would be subsequently required from the pumping stations.

For the pumping station control units in construction phases 0 and 1, "BasicLogo" and "EasyLogo" control units were selected, the former with tried and tested PCB control units, the other with easily operated microprocessor control units. Both units work with single message transmissions, they are connected to the process control system and report potential faults (pump faults, power cuts, high water level alarm, etc.).

For construction phases 2 and 3 (at present 34 pumping stations) the new "HighLogo" controls from Jung Pumpen were chosen. This new generation of microprocessor control units enables a direct connection to the process control system. As a fully-fledged telecommunications system it allows all control and monitoring options, just as if the operator were on site. For example, important information and fault messages are also sent automatically to the service technician directly via SMS, thus ensuring prompt intervention on site.

Ready for use and optionally extendable - "HighLogo"
The level of information to be retrieved and the extent of the remote control possibilities can be set as required: the number of working hours, motor protection, running time restriction, motor current, start delay time, forced emptying, or the duration of any test runs necessary can be adjusted as required using the user-friendly interface of the process control system. This also enables the parameterisation of the systems to be carried out quickly and simply and the last 500 messages with dates and times can be read off to enable continuous logging.

Georg Marschollek of the Wermelskirchen wastewater company is absolutely convinced by the new technology. "With the catchment area around the Grosse Dhuenn reservoir and the somewhat fragmented residential areas, Wermelskirchen now has - from a "disposal point of view" - sensitive and challenging infrastructure. The tried and tested systems have been extended over the years and they needed to be coordinated with each other. The pumping stations and control units that have been added in the last few months have significantly minimised this coordination problem thanks to their one hundred percent compatibility. A further advantage is most definitely to be found on the costs side: due to the individual configuration of the Jung Pumpen systems - according to the information required on our part - we were able to reduce the costs by 50 percent in comparison with the purchase of conventional and often "over-designed" systems", says Georg Marschollek, summarising his experience of the integration of the new systems.

The harmony between the existing systems is also reflected in the everyday operation. In the last 12 months, for instance, there has been only one unfounded fault message (a classic "false alarm") on average per month. "The stability of the whole system deserves top marks in my opinion and the easy operation of the "HighLogo" software makes the everyday work using the process control system much easier", concludes Georg Marschollek.