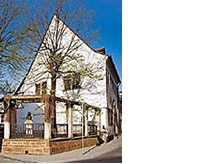 The biggest attraction of the Lutheran town Eisleben in Saxony-Anhalt is a middle-class residential home, built in the middle of the 15th century. It has earned its status as a UNESCO World Heritage Site thanks to the most famous son of Eisleben, a man who was born right here: Martin Luther. After a fire in the year 1689, the town of Eisleben restored Luther's birthplace and in 1693 erected the first officially mentioned memorial for the great church reformer.

Aside from the actual birthplace of Martin Luther, the site also includes the so-called Luther free school for the poor. In the inner courtyard of the site a new building is currently under construction; it will contain a new permanent exhibition by the name "This is where I am from - Martin Luther in Eisleben" and introduce interested visitors to the former inhabitant of the house, as well as his work. The museum as well as the new accompanying visitor centre are to be opened in March 2007. "The new additions will once again make these historically significant sites substantially more attractive for visitors," Dr. Christian Philipsen from the Luther Memorials Foundation of Saxony-Anhalt (www.martinluther.de), builder of and responsible party for the museum installations, is convinced.

The reliable sewage treatment of the new building complex is handled by the packaged sewage disposal unit compli 1010 by Jung Pumpen. The floodproof duplex unit features a corrosion-resistant PE-plastic tank as well as a Vortex impeller made of wear-resistant cast iron. The managing director of the company responsible for the installation "Heizung, Sanitär und Klempner e.G." in Eisleben (www.klempner-eisleben.de), Ulf Marche, is especially convinced by the simple assembly of the installation. "We have been working with products from Jung Pumpen for many years. Aside from their reliability - the complaints rate is almost zero - our engineers were impressed especially by the easy and quick installation. The compli installations are delivered ready to plug in and are operational in a very short time," according to Ulf Marche.